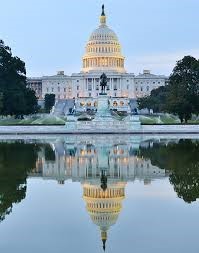 One the most symbolic architectural structures that crowns Capitol Hill is The Capitol Building and has stood for over two centuries.  It houses both the Senate and House of Representatives, the legislative branch of the government. 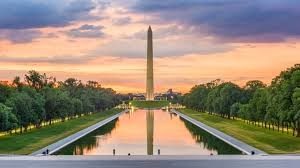 The Washington Monument is the tallest structure in D.C. standing 555 5/8 feet high and shaped like an Egyptian obelisk.  It commemorates the prestige efforts of George Washington’s military leadership, statesmanship, and wisdom. 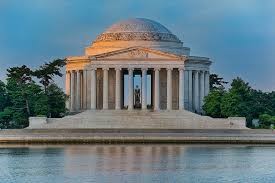 Our third president of the United States, Tomas Jefferson, wrote The Declaration of Independence.  He stood for freedom, equality, education, and independence.  The memorial represents the Age of Enlightenment as he looks out toward the White House.  Standing nineteen feet tall and weighing five tons, Thomas Jefferson’s bronze statue stands in the middle of the structure. 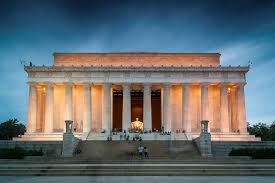 Thirty-six columns surround the Lincoln Memorial symbolizing the number of states in the Union at the time of Abraham Lincoln’s death.  This memorial stands as a social justice and national unity for generations to come. 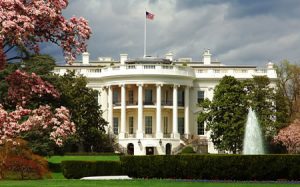 The White House stands as a symbol of the presidency. The home was completed in 1800 and every president since John Adams has resided here.  It is significant for the decisions made within its walls and the architecture.

Arlington National Cemetery is a place of reverence honoring those who have served our country and now are laid to rest.  With over 600 acres, the hills are lined with white headstones.  The Changing of the Guard at the Tomb of the Unknown Soldier is an unforgettable experience and is guarded 24 hours a day all year round. 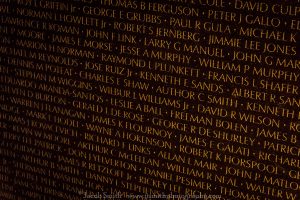 More than 58,000 American names cover the walls of the Vietnam Memorial.  The names displayed are those who have passed or remain missing from the Vietnam War.  Distinctively, the reflection connects the past with the present in remembrance of who all served during the ten-year period. 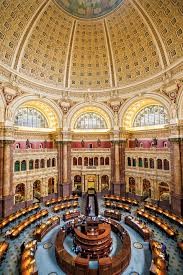 The Library of Congress displays magnificent architecture designs.  Marble floors and stained-glass skylights decorate The Great Hall of the Jefferson Building leading up to the Library.  There are more than 38 million books available for research. 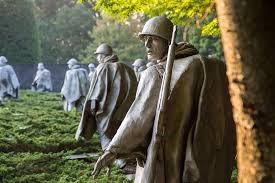 The Korean War was one of the most hard-fought wars in U.S. history.  5.8 million U.S. armed service men and women are commemorated for their sacrifice during the duration of three years.  The Korean War Veteran’s Memorial is composed of four parts.  The Mural Wall of black granite reflects the stainless-steel statues and gives an illusion of 38 soldiers.  This is symbolic to the 38th Parallel and the 38 months of the war. 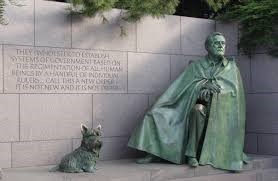 Franklin D. Roosevelt, our 32nd President, was honored for his courage and great leadership during the Great Depression and WWII.  The memorial pathway leads you through four areas representing the four terms of office of which President Roosevelt was elected. 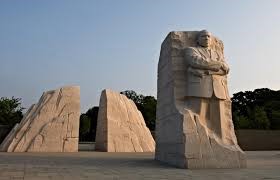 “Out of the mountain of despair, a stone of hope.”  Martin Luther King, Jr. Memorial entails quotes during his long civil rights career.  The 30 ft., white granite memorial is a representation of strength and inspiration to others fighting for civil rights around the globe. 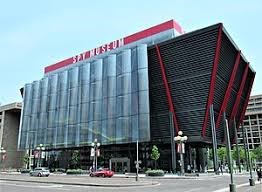 The Spy Museum offers guest to set out on an undercover mission throughout the Museum.  It is privately owned and dedicated to the invisible profession of the spy world.  See a replica tunnel from East Berlin that US spies used to tap the Soviet Union Communication lines.  Do you have what it takes to be a U.S. Spy? 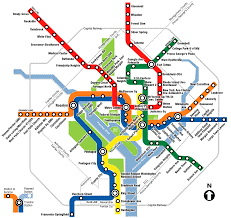 The Washington Metro was opened in 1976 with 6 lines and 117 miles of track. The Metro is the second busiest rapid transit system behind New York.  Daily ridership is estimated around 626,000.  A SmarTrip card is the only payment method accepted on Metrorail. 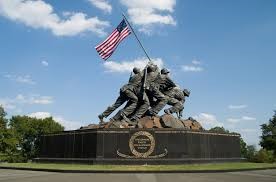 The U.S. Marine Corps War Memorial (more commonly known as Iwo Jima Memorial) is a bronze statue replicating a photo taken in 1945, during WWII.  The memorial gives the illusion of six marines raising the flag as you circle around the statue.

The United States Holocaust Memorial Museum documents and interprets the history of the Holocaust in remembrance of the millions persecuted.  Daniel’s Story, the primary exhibit, depicts what it was like for a young boy during the horrendous time. 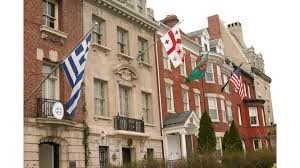 After the Great Depression, Embassy Row came to be known.  The expansive estates are homes to many o f the District’s foreign embassies.  Once a year the diplomatic buildings are open to the public.  When you step on the grounds, you are considered to be in that country. 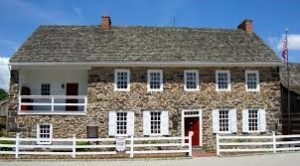 The Dobbin House is the oldest, most historical home in Gettysburg, PA.  The house was built in 1776 by Reverend Alexander Dobbin and now serves as a bed and breakfast.  The home was a safe place for many slaves traveling through to the North.  It is part of the underground railroad and has secret hideouts for those escaping the hardships at the time. 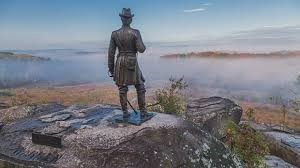 Walk the sacred grounds during the Civil War where the Battle of Gettysburg’s took place.  It was a turning point in the Civil War when the Union victory ended General Robert E. Lee’s invasion to the North.  President Lincoln inspiration of the “Gettysburg Address” derived from this battle.  The visitor center and guides offer much insight into those time of the war. 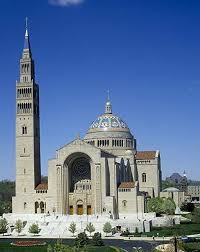 Basilica of the National Shrine of the Immaculate Conception

With over 80 chapels and oratories, the Basilica of the National Shrine of the Immaculate Conception is the largest Roman Catholic Church in North America.  Also known as Mary’s Shrine, it receives one million visitors each year and has been visited by several popes. 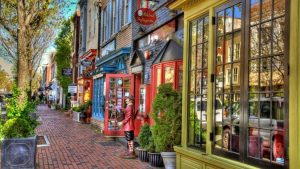 Take a step back in time to the 18th century of cobblestone streets and historic townhouses.  Old Town Alexandria is a historic district along the Potomac River and offers endless adventures.  Embark on a scavenger hunt, take a ghost tour with a lantern carrying guide, or just soak in the rich history of the “Old Town”. 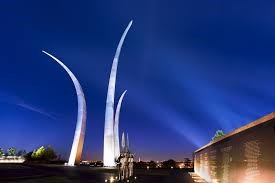 This three-spire memorial depicts the “bomb burst’ maneuver” used by the Air Force Thunderbirds.  The absent fourth spire implies the missing man formation traditionally used at Air Force funeral flyovers.  The Air Force Memorial commemorates the service and sacrifice of the men and women of the United States Air Force.  The illuminating effect of the memorial in the evening is captivating and the city lights can be seen for miles.

After the Great Depression, Embassy Row came to be known.  The expansive estates are homes to many o f the District’s foreign embassies.  Once a year the diplomatic buildings are open to the public.  When you step on the grounds, you are considered to be in that country. 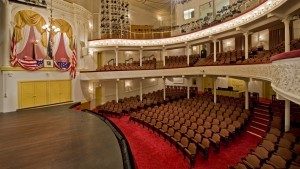 The State Box or “President’s Box” inside Ford’s Theatre replicates the night of President Abraham Lincoln’s assassination.  The crimson damask sofa and framed engraving of President Washington are original pieces left on display. 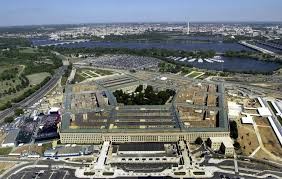 Housing approximately 23,000 military and civilian employees is the Pentagon.  It is the headquarters of the United Sates Department of Defense, with five sides, seven floors, and 17.5 miles of corridors. 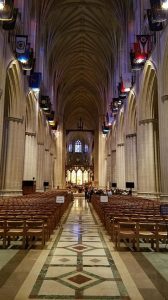 With over 80 chapels and oratories, the Basilica of the National Shrine of the Immaculate Conception is the largest Roman Catholic Church in North America.  Also known as Mary’s Shrine, it receives one million visitors each year and has been visited by several popes.

Opening in 1907, The Washington Union Station is the nation’s second busiest train station.  It has an annual ridership of just under five million.  If the Washington Monument were placed on its side, it would fit within the station’s concourse. 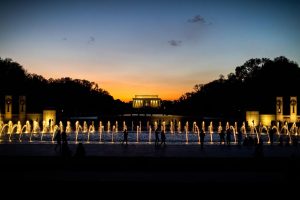 The World War II Memorial honors the 16 million who served in the armed forces during the six-year war.  It is divided into two sides, north and south, which represent the Atlantic and Pacific fronts.  When lit up at night the memorial has an unforgettable ambiance. 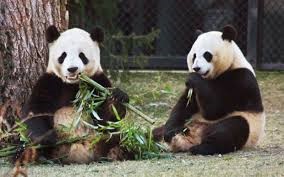 One of the oldest zoo’s in our nation is the Smithsonian National Zoological Park and is composed of two campuses.  The 163-acre, Rock Creek Park, exhibits most of the 1,800 animals, including the Giant Panda of central China! The Smithsonian Conservation Biology Institute is 3,200 acres and is devoted to training wildlife professionals. 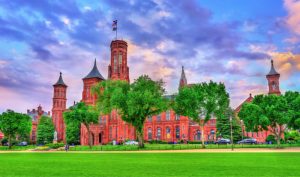 Today the Smithsonian Institution consists of over 19 museums, galleries, and a zoo.  Many of our nations historical artifacts are displayed at the National Mall of Museums.  These include the National Air and Space, Natural History, American History, and The National Archives Museum.  View the Declaration of Independence document, Dorothy’s Ruby Slippers, and The Hope Diamond.